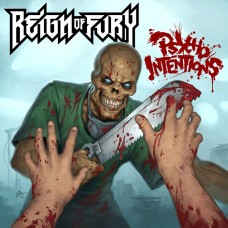 “PSYCHO INTENTIONS” Is the title of REIGN OF FURY's debut EP – which is now being released commercially for the first time to tie in with the bands debut appearance at the Bloodstock open air festival and release of debut album “World Detonation”. The video for the title track has received airplay on Scuzz TV and showcases the bands love of the big 4 and the classic 80s thrash sound, but done in a way that is very much of this decade! The band also have a very strong online presence and fanbase.