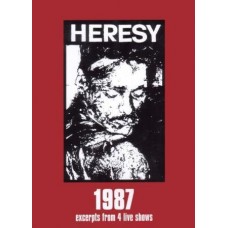 0 reviews  |  Write a review
Share
Description Reviews (0) Related Products (13)
HERESY need little introduction – legendary UK Hardcore pioneers, in their brief existence from 1985-1989 they defined an era. To co-incide with a trilogy of collectors CD/LP reissues of their recorded output, Boss Tuneage is proud to present this wonderful collectors archive DVD. Filmed totally DIY punk style on a single camcorder by their tour manager, “1987” follows the band on a tour of Belgium and Holland, featuring ultra rare live appearances and 17 full out blasting live songs to frenzied crowds! In addition to this, there are also some classic never seen before “behind the scenes” footage of the band and roadies which shows the bands humorous side too! There is also some remarkable archive footage of the band in the recording studio, recording the legendary “Thanks” 7” single! A must for those who there at the time, or any fan of this legendary UKHC Band, caught at the top of their game!
Please note: This DVD has been digitally restored as best as possible from the original 20 year old video cassette tape, but this is a true DIY punk lo-fi recording, and not a multi-camera angle swish MTV affair!!.