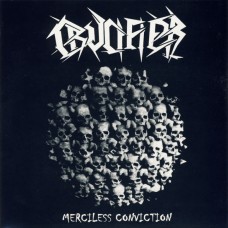 The first full-length album “Merciless Conviction” released in 2002 and this is the great time for Hell Productions to re-release this album again with the f*ckin bonus tracks from the Innocent World Demo (2001) in 2009.  Crucifier is a greek athenian band which plays old school thrash-metal.  But real thrash not like caliban-thrash..thrash metal like early exodus,kreator,early metallica and stuff like that you know...  The lyrics are really into the trend of thrash metal, talking about society, politics and i would say social issues too