EXTREME ATTACK - In the Name of Thrash Metal CD 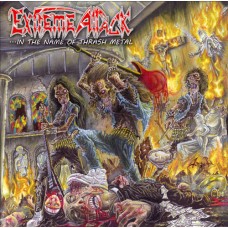 0 reviews  |  Write a review
Share
Description Reviews (0) Related Products (35)
EBM records presents the 29th offering of the "Thrash is Back" Series.
On their 2011 debut, Assassin, Ecuador-based Thrashers Extreme Attack quickly showed metalheads that they were much more than your average thrash band. In the Name of Thrash Metal immediately showcases the band's highly skilled musicianship. Blistering guitar work once again highlights the album.
In the Name of Thrash Metal is an urgent and furious record that is sure to excite thrash fans young and old (school).
These are true thrashers, not some pubescent fanboys, and the difference is noticeable and, for fans of the genre, quite welcome. This album proves the early potential they showed has been fulfilled, and more than justifies the intensely strong fanbase they've built throughout Latinamerica!
Extreme Attack is one band and In the Name of Thrash Metal is one album that will make their own memorable mark on 2013.
Needless to say that this is one of the most expected Latin American Thrash Metal debuts in the last years !
Track List:
1. 66
2. Final judgement
3. Metal slave
4. Hell is your destiny
5. War never ends
6. Sinners in Heaven
7. War is shit
8. Hell's priests
9. Assassin
10. Thrash Metal