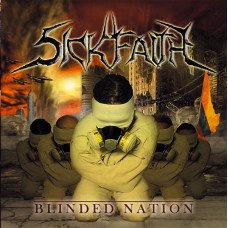 0 reviews  |  Write a review
Share
Description Reviews (0) Related Products (32)
EBM records presents the 30th offering of the "Thrash is Back" Series.
If one word could describle Blinded Nation as an album it would be energy !. High speed, highly technical Thrash coming from Colombia
This is definitely one of the Southamerican standout releases of 2013. Filled with great solos, catchy riffs, over the top production and great musicianship it is a must have for fans of the newer version of thrash as well as the fans from the golden era.
100% Recommended for old and new fans of Sadus, Sacrifice, Recipients of Death, Vio-lence and Razor !
Track List
1. War's prelude
2. Endless war
3. Blindfolded
4. Tyrannical government model
5. Slag's justice
6. Ashes of illusions
7. Forgotten humanity
8. Killing scorn
9. Unborn condemned