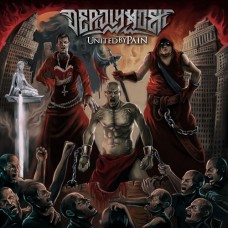 EBM records presents the 38th offering of the "Thrash is Back" Series.

With an already solid discography, Deadly Mosh has defined a very particular sound
that has evolved from their previous efforts, making "United by Pain" their best album so far
since it shows the band's true possibilities.

The band performance is impressive and the result is an album full of haunting melodies and power. Tracks like 'Self-destruction', 'Claws of fear' or 'Altar of pain' possess an almost unreal power, melodic speed and atmospheric density.

The Milos “Priestkiller” vocals on "on the fields of glory" are astonishing and impressive.

Besides the excellent instrumental and vocal skills, the band prove their worth by supplying exceptional songwriting prowess, mixing heaviness and melody, fast and mid tempos with just enough power and musicianship to make a great album

The band's progress is notable and "United by Pain" is another top level album that is mandatory for every true serious Thrash Metal collection.

With 'United by pain', Deadly Mosh have probably recorded their most versatile album to date, and it is still 100% Deadly Mosh !!