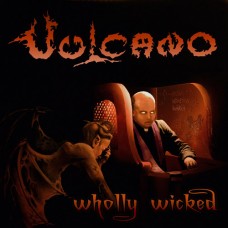 VULCANO, the legendary extreme metal band from Brazil, is hitting North American shores through Quebec-based label and distributor PRC MUSIC on May 5th, 2015 with its ninth studio album, the apptly entitled "Wholly Wicked". Considered the first extreme metal band from Brazil (and by many the first South American extreme metal band), VULCANO formed in 1981 and released its first single somewhere in between 1982 and 1983 (entitled "Om Pushne Namah") and started playing live. The first demo "Devil on my roof" was released in 1984 quickly followed by the first live album ("Vulcano Live!") ever released by a Brazilian band. The band went on releasing the very first brazilian Black Metal album in the shape of "Bloody Vengeance" in 1986 (now boosting a cult status worldwide!).