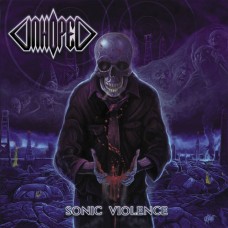 EBM records presents the 42th offering of the "Thrash is Back" Series.

With a previous discography of 3 works (1 Demo, 1 EP & 1 LP), 'Sonic Violence' uses plenty of the same Unhoped formula as in the previous 2013 effort 'Nuclear Death'. There is plenty of speed in the verse parts of the songs, there are time change ups everywhere and lots of cool beats. But most of all what is different about this album than previous ones is that Unhoped was beginning to branch out into a more musically diverse territory with different time signatures and speeds that are sped up and slowed down almost effortlessly.

The guitar tones are deadly and ultra-heavy crunch, the drums...he just plows thru the music. This is thrash drumming at its finest, period.
Now to the creme dela creme: the vocals... these are some of the most venomous vocals you will ever heard!
Unhoped's style can be summed up as fast and brutal thrash metal with plenty of death metal overtones and over-the-top aggression.
If you are into bands such as Demolition Hammer, Razor, Exumer, Slayer and Sadus then you will love the absolute aggression, brutality and pure, unadulterated heaviness this album produces.