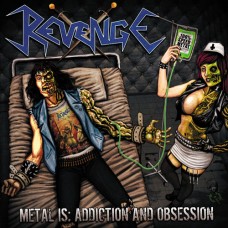 EBM records presents the 45th offering of the "Thrash is Back" Series.

With more than 15 years in the colombian metal scene, Revenge Has earned a well-deserved reputation as one of the most hard worker bands and their name is already a reference in the whole southamerican scene.
Metal is addiction and obsession was Revenge´s fifth studio album and was released as celebration of the band´s 10th anniversary.

Revenge hasn‘t reached their peak yet, but Metal is addiction and obsession shows the band on the summit of their creative power!. Original, uncompromising and full of bone sawing guitar riffs, the band comes up with Thrash hammer after Thrash hammer just like that. Garnished with sophi-sticated string work, every single one of the nine songs will lash a grin into your face.
Metal is addiction and obsession is, without doubt, one of the best Revenge´s albums so far, and has become already a reference in the current Southamerican Thrash/Speed Metal scene.
This re-edition features 4 live tracks as bonus plus reworked booklet layout.