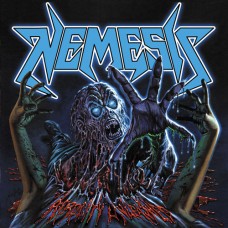 EBM records presents the 47th offering of the "Thrash is Back" Series.

Formed in 2008 under the short lived name, "Ravage"; Nemesis quickily entered the Charlotte scene with their unique raw, and fast style of thrash. Combining elements of bands like Exumer and Vio-lence with clean, high vocals in the vein of Nasty Savage and Agent Steel with "80's b-horror/sci-fi" themed lyrics. Of all the metal bands of the current "Thrash Metal revival", Nemesis is at the very top in terms of uniqueness, crazy riffs and lyrics, and mixing bizarre melodies with brutal heaviness.

In 2013 the band suffered a two year hiatus before being able to release their debut album. Things seemed quiet until 2015 when the band returned with a vengeance. Nemesis is back and ready to bring thrash metal to the masses! !.