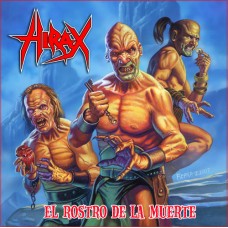 0 reviews  |  Write a review
Share
Description Reviews (0) Related Products (34)
Originally signed to Metal Blade Records / Roadrunner Records in the early ‘80s, HIRAX are legendary pioneers of thrash metal / cross over music. They have remained one of the top, international metal acts in the history of the genre.
“El Rostro de la Muerte” (“The Face of Death”) is the best HIRAX album to date... epic sound / production and professional engineering, with state of the art technology combined to bring all of the band's best elements to life on this 14 song recording.
This is the first full-length album since the classic, “The New Age of Terror” (2004). “El Rostro de la Muerte” will bring headbangers to their knees and leave them begging for more! This album is mandatory for all HIRAX fans!!. HIRAX refuses to compromise and remains true to their original sound, while at the same time utilizing modern recording methods and techniques.
This monstrous slab of metal is a relentless attack that will rip your face off and make your ears bleed!