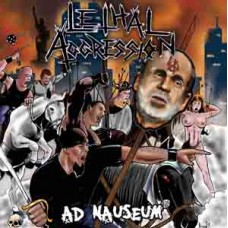 Thrashcore legends of the underground LETHAL AGGRESSION have returned! "Ad Nauseum" is the long awaited full-length follow up to their album "Life Is Hard..." released in 1989. L.A. continue to annihilate all of humanity with the strongest material recorded to date, featuring shredding guitars and intense vocals which follow in the old school tradition that the band helped pioneer in 1984. Your life is short... abuse it wisely! Includes hidden bonus track featuring an uncut live show from CBGB's recorded in 2003 featuring all the classics. This CD clocks in at over 74 minutes of vicious old school thrashing madness!!! For fans of Nuclear Assault, Cryptic Slaughter, DRI, Verbal Abuse, Napalm Death, SOD, Agnostic Front, Overkill, Crumbsuckers and Suicidal Tendencies