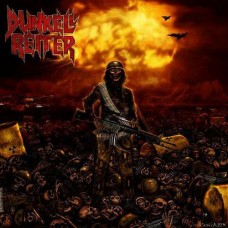 Brand: EBM Records (The Thrash is Back Series)
Product Code: EBM045
Availability: Out Of Stock
Price: $9.00

0 reviews  |  Write a review
Share
Description Reviews (0) Related Products (36)
EBM records presents the 17th offering of the "Thrash is Back" Series.
Brazil is well known for having one of the biggest and most important Metal scenes around. lots of influential and cult bands have emerged since the early 80's.
DUNKELL REITER along with other killer acts such as Violator, Farscape and Blasthrash are part of the New Brazilian Thrash Metal Wave.
Rawness, speed and aggression are the main reference when listening to the band's music, the obvious 80's Heavy/Thrash Metal influence are here, they dont try to re-invent the scene, just follow their passion for what they love the most: Pure and Simple THRASH METAL !!
Includes 3 live tracks as bonuses
100% mandatory for those into old Sepultura, Attomica and Violator !