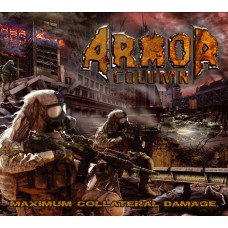 0 reviews  |  Write a review
Share
Description Reviews (0) Related Products (49)
EBM records presents the 12th offering of the "Thrash is Back" Series.
Could we be called "pretentious" by describing this album as a complete 'Master Work' ?
Maybe, but the truth is that Armor Column is a band with amazing talent and potential which makes their future truly promising.
Classic, oldschool and intense US power/speed metal at its best, fantastic "rapid-fire" 2-guitar work and a singer with such top qualities and capacities that can easily be considered as one of the best in the current US underground metal scene , making this album a definitive Speedmetal Pre-Classic !!!
The artillery attacks from the first track, and like a storm the band continues their assault through 8 non-stop metal barrages that will leave you eager for more !!.
Comes in a Deluxe 6 panel Digipack edition with amazing artwork by Jumali Katani
For fans of Helstar, Overkill, Exodus, Flotsam And Jetsam , Forbidden etc.