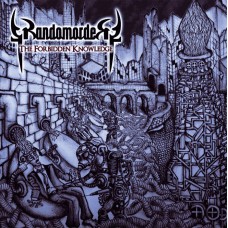 0 reviews  |  Write a review
Share
Description Reviews (0) Related Products (47)
EBM records presents the 19th offering of the "Thrash is Back" Series.
Australian thrashers Randomorder have created one hell of an album. The Forbidden Knowledge is packed with a ton of originality, mixed with influences from old-school thrash greats such as Sepultura, Slayer, Kreator and Sodom.
Randomorder will blow any listener away with their massive assault of thrash fury. The top-notch production of this album allows the listener to hear every impressive solo and face melting riff this album has to offer, and trust me when I say this album features a ton of them! Matching the killer axe attack in intensity and skill are the vicious vocals and devastating drums that feature a mixture of tempos ranging from average speeds to furious blast beats. Indeed Randomorder are the complete package and The Forbidden Knowledge is proof of this.
With The Forbidden Knowledge, Randomorder have proven they are a force to be reckoned with in the world of extreme metal. Not only has the band released their debut album but Randomorder have released an album that will be considered a classic in the years to come.