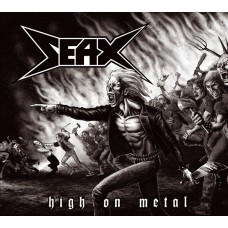 Brand: EBM Records (The Thrash is Back Series)
Product Code: EBM048
Availability: Out Of Stock
Price: $19.00

0 reviews  |  Write a review
Share
Description Reviews (0) Related Products (45)
EBM records presents the 20th offering of the "Thrash is Back" Series.
SEAX combines uncompromising old-fashioned speed metal with an unabashedly punk sensibility. The band have captured the essence of that metal/punk hybrid that characterized so much of what we called “speed metal” during the 80s, I cannot think of any other current band mining the same territory quite the way SEAX does.
Formed in 2010 this group of thrashers set out to bring old-school thrash/speed metal to the New England area and eventually bring their style of music to the rest of the world
SEAX music has a purity, a simplicity, a nostalgia and an unstopable energy that sets this band apart from the rest.
High on Metal will be definitely the soundtrack to one of your favorite nights of live heavy metal music in recent memory.