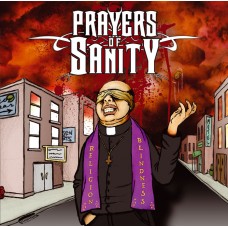 0 reviews  |  Write a review
Share
Description Reviews (0) Related Products (30)
EBM records presents the 3rd offering of the "Thrash is Back" Series.
Coming from Portugal and nominated already as the best "Thrash Metal" album of 2009 at "Thrash Zone", Prayers of Sanity have decided to show everyone that 80's Thrash still lives.
Altough influenced by several music genres, Thrash-Metal stood out and defined the stile of these Portuguese Thrashers.
After 20years of the origin of this genre, Prayers of Sanity made Thrash-Metal a constant meal, but still adds its touch of modern energy, beer and party! Prayers of Sanity are not "just another Thrash band"!
Religion Blindness is the Band's debut Full Lenght and is the best example of some of the best Thrash Metal coming from Europe at this modern day.
The music is intense, the shows are passionate and you can feel how the Metal flows through the blood of these Young and Promising Thrashers !!