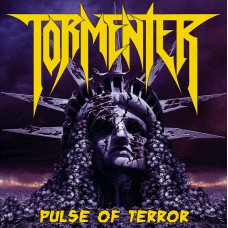 Brand: EBM Records (The Thrash is Back Series)
Product Code: EBM033
Availability: Out Of Stock
Price: $19.00

0 reviews  |  Write a review
Share
Description Reviews (0) Related Products (30)
EBM records presents the 6th offering of the "Thrash is Back" Series.
Straight off the streets of LA, Tormenter is a 5-piece Speed Thrash entity ready to bring the LA metal scene to a new level. The band has vigorously been working hard to establish themselves as one of the premiere bands in LA. Taking influence from bands like Testament, Exodus, Kreator, Razor, Sepultura, and Metallica; Tormenter has developed a sound they can call their own. The band has released the EP "Assault From Beyond the Grave" which was met to great interest. They have had the honor of gracing several stages in the LA area as well as other areas in CA, with such bands as Exodus, Destruction, and Obituary. With a positive outlook on the things to come the band is prepared make a fan out of anyone to come into their presence.
Cover Artwork by killer Artist Jumali Katani.