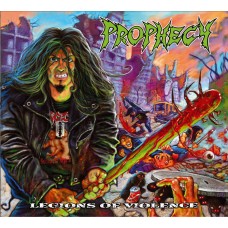 Brand: EBM Records (The Thrash is Back Series)
Product Code: EBM034
Availability: Out Of Stock
Price: $12.00

0 reviews  |  Write a review
Share
Description Reviews (0) Related Products (33)
EBM records presents the 7th offering of the "Thrash is Back" Series.
Originally released by Morbid Tales recs from Brazil for Southamerican distribution, EBM has the honour to re-release the debut full-length of one of the most amazing current Brazilian Thrash Metal units.
The band's clean and very technical Thrash Metal sound really captured our attention after the first listen. We immediately realized the imminent talent of this young thrashers.
Prophecy is without any doubt a true Southamerican promise with a very potential future and we have no doubt that they will become soon in a true reference for all the Southamerican Thrash Metal music.
Definitely one of the best Thrash Metal debut albums of 2008.
Comes in a Deluxe Digipack edition and includes a 12 pages booklet with lyrics, photos and info.
Also this Deluxe edition includes 2 extra tracks taken from a previous demo as Bonuses.
Those into early Metallica and Megadeth will be amazed !.