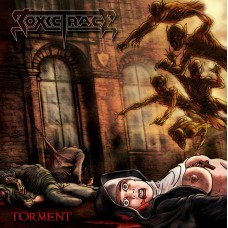 Brand: EBM Records (The Thrash is Back Series)
Product Code: EBM035
Availability: Out Of Stock
Price: $12.00

0 reviews  |  Write a review
Share
Description Reviews (0) Related Products (30)
EBM records presents the 8th offering of the "Thrash is Back" Series.
Influenced by first-wave of German thrash metal bands such as Kreator, Sodom and Destruction TOXIC TRACE, the new formidable Serbian force, offers some of the most raw and crude Speed/Thrash metal coming from Europe at this modern day.
Unstopable Speed is the main reference of this Thrash Tornado that along with other killer acts such as Pollution, Nadimac and Space Eater have put Serbia in the World Wide map as a reference and home of some of the new Metal Forces that surely will make history in fastgrowing thrash metal revival.
Torment is the band's debut full-length and is already destined to be one of the fastest Speed/Thrash metal albums of Today's Thrash Metal scene.