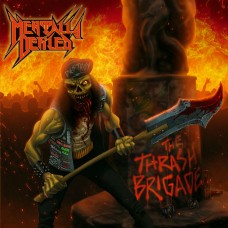 Brand: EBM Records (The Thrash is Back Series)
Product Code: EBM038
Availability: Out Of Stock
Price: $9.00

0 reviews  |  Write a review
Share
Description Reviews (0) Related Products (37)
EBM records presents the 10th offering of the "Thrash is Back" Series.
Coming from Greece and strongly influenced by the old Bay Area metal scene, Conspiracy has become a reference when talking about the current Greek's Underground Metal scene.
The band has giged actively and shared stage with classic acts such as Tankard, Annihilator and DRI among others.
Hope Over Board is the band's debut full-length and offers 10 tracks of pure Thrash/Crossover madness for the most hardcore metal heads eager for new talents that will define the path of the current Underground Metal Scene !!.